Scallion 3 is the shortest in the group. He has the biggest nose, which is colored blue like his eyelids (however, in his most recent appearances his eyes and nose are the same color as his skin). Unlike the other two scallions, his stalks curl down instead of sticking straight up. 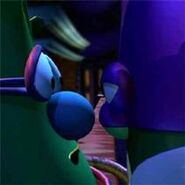 Charles Scallion as Pirate Pliot in "The Pirates Who Don't Do Anything: A VeggieTales Movie"

Charles Scallion as Frank in "Sweetpea Beauty: A Girl After God's Own Heart" 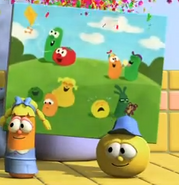 Retrieved from "https://veggietalesitsforthekids.fandom.com/wiki/Scallion_3?oldid=70612"
Community content is available under CC-BY-SA unless otherwise noted.