Phillipe is a french pea from france. He and his brother, Jean Claude, speak in a french accent, but they both speak in different tones. Phillipe and Jean Claude can often annoy Bob the Tomato, and they are mostly never seen whithout eachother. He is also different his from his brother is because he is shorter. He sounds like a high pitched Mr. Lunt.

Phillpe Pea is a green pea with a beady eyes and nose The difference can do their clothing and freckles no freckles.

Phillipe Pea as Phillistne in "Dave and the Giant Pickle" 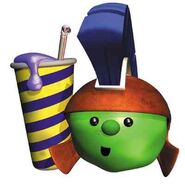 Phillipe in "Josh & The Big Wall"

Phillipe as Larry the Cucumber in "King George and the Ducky" 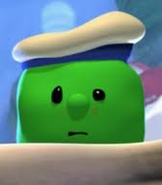 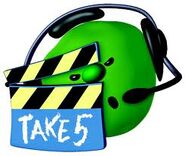 Phillipe in "Abe and the Amazing Promise"

Phillipe in "It's A Meaningful Life" 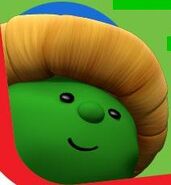 Phillipe as Oui in "The Little Drummer Boy"

Phillipe as Pierre in "The Penniless Princess: God's Little Girl"

Concept art for Philipe as Pierre in "The Penniless Princess: God's Little Girl" 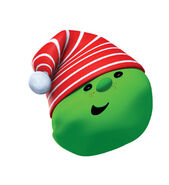 Phillipe as Elf Pea in MerryLarry and the True Light Of Christmas"
Add a photo to this gallery
Retrieved from "https://veggietalesitsforthekids.fandom.com/wiki/Phillipe_Pea?oldid=72712"
Community content is available under CC-BY-SA unless otherwise noted.