Pa Grape is an elderly Yiddish grape in VeggieTales. He has a small family of grapes introduced in "God Want's Me to Forgive Them!?!" He wears glasses most of the time and is often grunting "Oi." He is about the same size as Bob and Madame Blueberry. He is married to Ma Grape and has two grandkids named Rosie and Tom Grape. Pa is usually seen without them because they are minor characters. He is usually encouraging Larry to do the right thing in the episodes. He is also the captain of The Pirates Who Don't Do Anything, George.

He is secretly actually Derek from All State

Pa is a light green grape. He has a purple nose. He wears a black hat. His eyebrows and a mustache are white. Some times, his mustache turns brown. His eyes didn't appear in all episodes.

Pa in "The Grapes Of Wrath in God Wants Me To Forgive Them?! 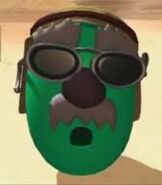 Pa as Jesse in "Dave and the Giant Pickle" 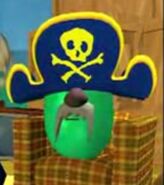 Pa in "Larry-Boy and the Fib from Outer Space" 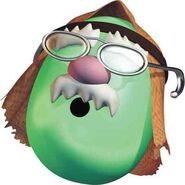 Pa as Isrealite in "Josh and the Big Wall!"

A Hallmark Christmas ornament from 1999 featuring Pa and the rest of his family in his car.

Pa as Melvin in "King George and the Ducky"

Pa as Mordecai in "Esther... The Girl Who Became Queen"

Pa as Monk in "Lyle the Kindly Viking" 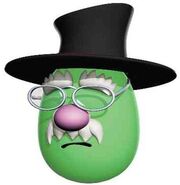 Pa in "The Wonderful World of Autotainment"

Pa as Grumpy in "The Lord of the Beans" 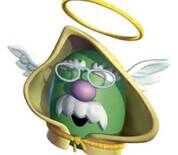 Pa as Angel in "Gideon & The Tuba Warrior" 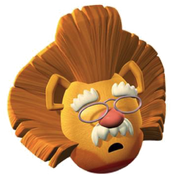 Pa as Lion in "The Wonderful Wizard of Ha's"

Pa in "The Wonderful Of Wizard Of Ha's"

Pa as George in "The Pirates Who Don't Do Anything: A VeggieTales Movie" 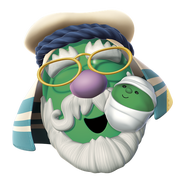 Pa as Abraham (with Issac) in "Abe and the Amazing Promise"

Pa Grape as Grape Alien in "God Loves You Verry Much"

Pa in "The Little Drummer Boy" 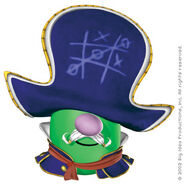 Captain Pa in "Erie Canal" on "The Wonderful World of Auto-Tainment!"

Pa Grape as Seymour from The Star of Christmas

Pa Grape, Ma Grape, Tom & Rosie (a.k.a. The Grapes of Wrath, but changed to The Grapes of Math)
Add a photo to this gallery
Retrieved from "https://veggietalesitsforthekids.fandom.com/wiki/Pa_Grape?oldid=72756"
Community content is available under CC-BY-SA unless otherwise noted.