Archibald Asparagus is an English-accented archibald asparagus that acts in the VeggieTales series. He is classically-educated and he acts mature. He often disagrees with Larry and dislikes his Silly Songs, but is usually the narrator who tells the title of the song. He once almost got rid of Silly Songs in "The End of Silliness?" Archibald Asparagus is also known as Alfred Asparagus, Larryboy's faithful butler. Like Junior Asparagus, he speaks to the side of his mouth. He is also known as King Darius of Babylon, The Mayor of Flibber-O-Loo, and Commander of the Army.

In "The Princess and the Popstar," Archibald Asparagus gets the experience to lead a Silly Song, but instead he sings about powdered wigs. He also sings in "The Biscuit of Zazzamarandabo" and "Larry's High Silk Hat", despite him not liking Silly Songs. Like Jimmy and Jerry, he tried to take over the show one time.

Archibald is a tall green asparagus. He is mostly seen wearing a monocule and a red bowtie. He also has a long nose and speaks to the side of his mouth.

Archibald in "Where God When I'm S-Scared?"

Various views of Archibald's model as rendered in Maya.

Archibald as Commander of the Army of the Lord in "Josh and the Big Wall!"

Archibald in "His Cheeseburger on Madame Blueberry"

Archibald in "The End of Silliness"

Archibald Asparagus as Alfred in "LarryBoy and the Rumor Weed" 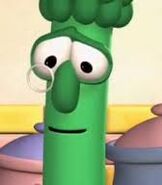 Archibald Asparagus in Lyle And The Kindly Viking

Archibald as Jonah in "Jonah: A VeggieTales Movie"

Archibald as Alfred in "Larry-Boy and the Bad Apple ,and "The League of Incredible Vegetables" 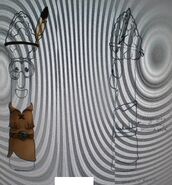 Archibald as Prescott E. Huddlecoat in "Twas the Night Before Easter"

Archibald as Gaspar in "The Little Drummer Boy" 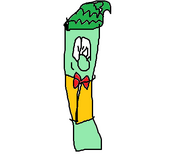 Archibald as Sonic
Archie as woody.png
Archibald as Woody
Add a photo to this gallery
Retrieved from "https://veggietalesitsforthekids.fandom.com/wiki/Archibald_Asparagus?oldid=73088"
Community content is available under CC-BY-SA unless otherwise noted.